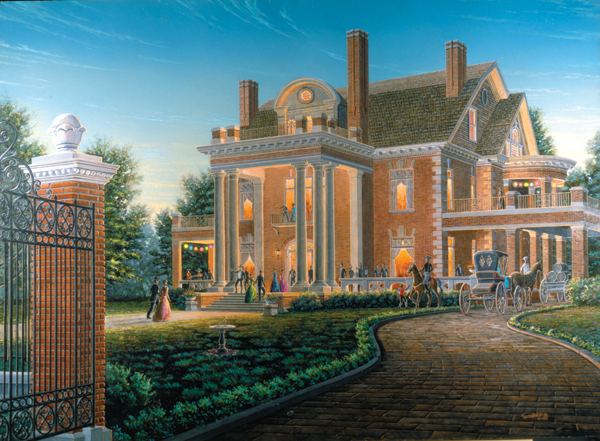 This magnificent original painting features a most impressive home built for the daughter of a real Texas oil and cattle baron. The mansion --known as "Thistle Hill"-- still exists in the artists' hometown of Fort Worth, Texas. The setting of the painting features a common occurrence at the home --a gala evening with the upper crust of turn-of-the-century Texas society.

In the fall of 1985 artist Randy Souders had a one-man show, sale and auction inside Thistle Hill. This painting was purchased that evening by Dallas area collectors along with several other Souders originals and lithographs.

"Cattle Barons' Ball" proved exceptionally popular and was subsequently published by the artist in 1985 as a signed & numbered "limited edition" print. The edition quickly sold out. "Secondary market" sales (i.e. those prints bought and sold by collectors once the edition sold out) appreciated substantially from the original issue price of $70. Publishing an original painting provides a painting a much greater degree of notoriety and fame. The increased awareness often translates into a painting that commands top dollar when offered for sale.

"Cattle Baron's Ball" is painted on wood panel using a centuries old transparent glazing process made famous by many old masters.  Light penetrates the various layers and is reflected back thereby giving the painting a luminous quality and more of an inner glow.

This painting measures 24x30" not including the width of the frame. It is exquisitely detailed by the artist at the height of his powers. Widely viewed as one of his most memorable pieces, this iconic painting remains one of Randy's best-known and most beloved works.

About the home that inspired the painting:

Historic Fort Worth owns "Thistle Hill" mansion located at 1509 Pennsylvania Avenue (just southwest of downtown in the hospital district). Built for Electra Waggoner, the daughter of one of Fort Worth’s wealthiest cattle baron’s, A.B. Wharton paid $46,000 for the construction of his 11,000 Square foot home. In 1901, Electra had met Albert Buckman Wharton, a prominent Philadelphian, while touring the Himalayas. They were married in 1902 at her family home in Decatur, Texas known as "El Castile."

Completed in 1904, Thistle Hill graced the crest of Summit Avenue in the fashionable residential district known as Quality Hill and quickly gained a reputation for opulence and lavish entertainment. Albert owned and managed the first Fort Worth Auto and Livery Stable and dealt in Winston and Franklin cars.

Thistle Hill was sold to Mr. and Mrs. Winfield Scott in 1911, longtime acquaintances of Electra's parents. Mr. Scott, a successful cattleman and prominent Ft. Worth businessman, embarked on an extensive remodeling of the mansion, converting it from Colonial to Georgian Revival.

Sadly, Mr. Scott died in 1911 and Elizabeth Scott and their son, Winfield Jr. moved into the mansion in 1912. During her 26-year residency, Elizabeth expanded the gardens and added a tea house and pergola to the grounds. She was known as an elegant hostess and her dinner parties were very formal affairs.

After his mother's death in 1938, Winfield, Jr. sold the mansion to the Girls Service League. The League, founded in 1917, is still in operation today and is dedicated to the assistance of young women. In 1968, the League put the mansion up for sale.

The house was designed by Sanguinet & Staats and built in 1903-1904. The property was designated a Recorded Texas Historic Landmark in 1977, and has been placed on the National Register. It is owned and operated by Historic Fort Worth, Inc., Thistle Hill is a popular location for weddings, parties, and other special events.  Knowledgeable guides make the Thistle Hill tour one of the most popular historical attractions in the city.

©Frommer's Review
"This historic 1904 Georgian Revival mansion, the former residence of two prominent Fort Worth families, has been lovingly restored with period furnishings. The residence, rumored to be ghost-ridden, has an elegant oak grand staircase and a wealth of interesting details, including eight fireplaces, five full bathrooms, and, unusual for the period, electric and gas lighting and built-in closets. The 45-minute guided tour, which has recently really jumped in price, relates the curious anecdotes of the mansion's history. The cattle baron W. T. Waggoner built the home for his eccentric daughter Electra (who took milk baths and is said to have been the first to spend $20,000 in a single day at Neiman Marcus); it then passed to Winfield Scott, who made many changes in the home, adding its limestone columns; and it finally became a girl's school, later abandoned."